The Musician (Beyond The Sounds)

original manuscript in english by Heloisa Prieto
translated into portuguese by Victor Scatolin
Renowned young musician and composer, Thomaz felt as if he were surrounded by musical beings, ever since he was a little boy. Invisible and inaudible to others, his creatures connected to him by constantly dancing around him, emitting secret melodies he felt the urge to share. As Thomaz played his unique music, his audience experienced different types of life changing journeys. His path is suddenly invaded by dr. Alonso, a mysterious and renowned myth researcher, and his beautiful daughter, Dora, who not only want to listen to him, as well as to snatch his gift. However, they will have to face Thomaz' new friend, Marlui, the lovely girl from the Forest People who will somehow act as a true primordial musical guardian.

Inspired by the songs of Estás Tonné, the narrative is meant to take the reader beyond the sounds, beyond words, as enchanted vivid dreams and terrifying nightmares.

The story has been developed by Heloisa Prieto having as its first critical reader, Estás Tonné himself. A true artistic exchange aiming at the creation of a magical tale. 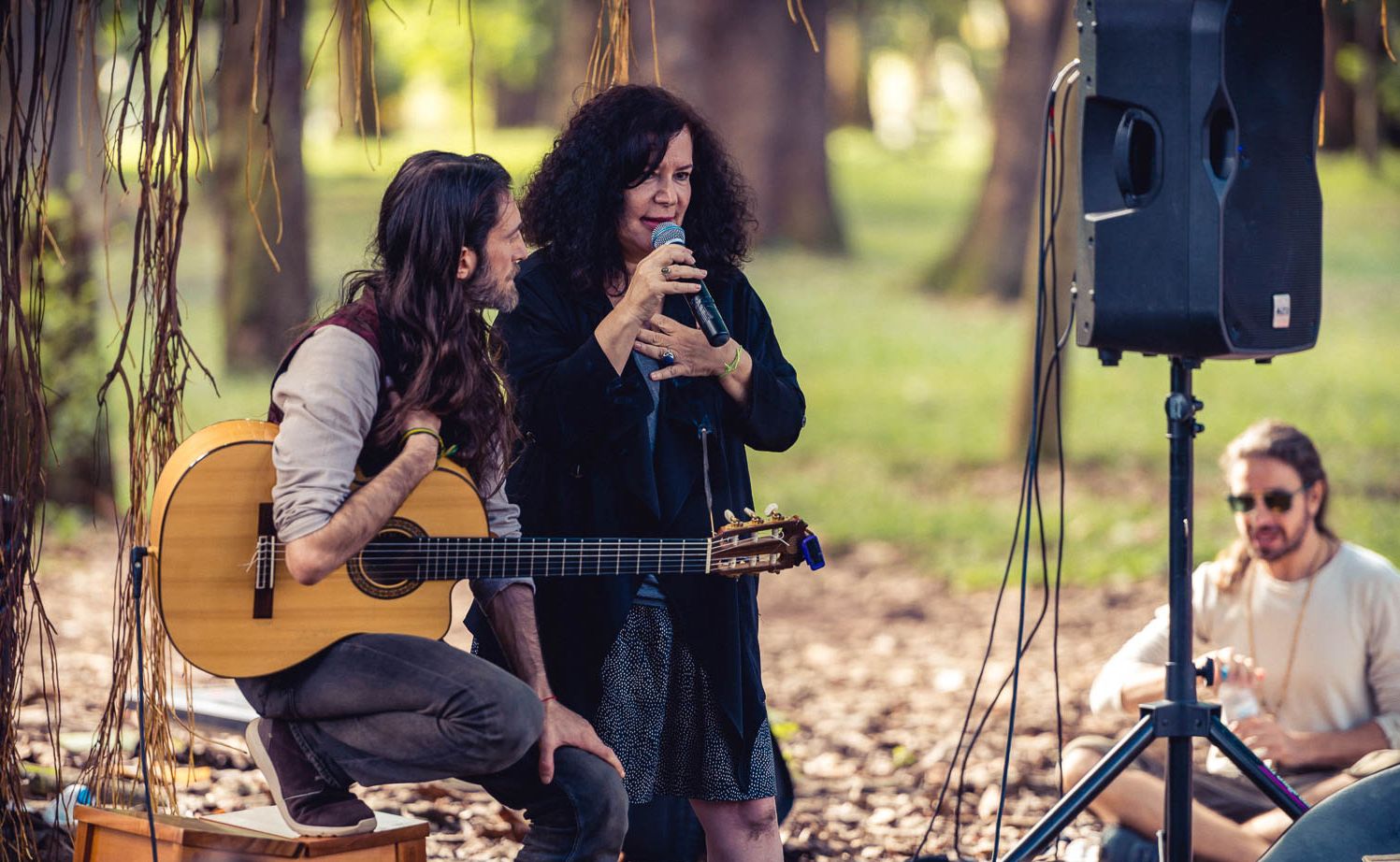 The Musician (Beyond The Sounds)

excerpt from the book

Thomas was on the verge of a panic attack. Everything seemed to be madly out of control. How come? Why? He breathed slowly, his mind trying to find the exact moment when things went wrong.

Before leaving home he had carefully placed all his papers in separate suitcases. He knew something seemed out of order the moment he woke up and realized his beautiful dream had erased itself from his mind. Not a good sign.

He looked around his hall. Thomas didn't like having his space crowded with sofas and tables. Guests were rare and they would always say he was a minimalist, maybe not to tell him straight face they thought he seemed a bit unusual. Carefully piled up books and notebooks were spread around looking like small, colourful buildings. Low, wooden tables were also covered by books, except for one, Thomas used for his meals. Hardly any chairs, since he enjoyed reading, playing and eating cross legged on the shining floor covered by a few asian carpets. Numerous musical instruments were always leaning against the white walls, as if they were trees in a beautiful musical forest.

Thomas always kept his suitcases near the entrance door as if he were about to travel. The brown largest suitcase kept his journals, the black suitcase his documents, the red one for all his appointment books, old and new; the green suitcase filled with lists of so many things yet to come, finally, the grey suitcase was plenty of pictures, fragments of ideas, puzzling, visionary dreams. The smallest suit, actually a handbag, kept sketches, photos from his childhood, also his photos from skies, mountains, lake, moons, stars and the sea…

He slowly touched all his cases and somehow felt relieved. Everything seemed to be under control.

He glanced at his cell phone. Plenty of time to have a cup of coffee. Thomas looked at his luggage once more before going to the kitchen. The suitcases were all still. No creatures trying to flee away from his pages. He took a deep breath. Ever since he was a small boy he had seen and heard musical beings. He first sensed their presence as sound and shadows, while still a baby, in his crib. Moving musical shadows, so friendly and beautiful he could spend hours just watching them dancing around him. It would take him years to realize that other children, let alone adults, could not see or hear his sweet melodic friends.

“My son loves his invisible friends” his mother would tell his teachers who took him for a crazy little boy. “Many kids have invisible pals, it is quite normal” she would insist.

It was useless. Teachers never treated him as the other kids. At least this is how Thomas felt. The cell rang; a voice mail from his mother. He smiled. She seemed to guess his thoughts sometimes. Thomas left his memories aside and looked out of the window. It was such a lovely day. He put on his black coat, his black hat covering his long dark hair. He glanced at the mirror and smiled. They were always with him. Musical Creatures. Secret creatures of sound. In a glimpse, he saw several beings smiling back at him. They danced in and out the mirror so fast, he could hardly follow their cute little movements. It was a turning point day. He could sense it. A lifetime spent in the company of music had certainly enlarged his mind and heart. However, he had not entirely developed his own musical eyes. So he could sense so many things, even the future but not predict it. Eyes are supposed to see, not to hear. What can happen when they do?

Tomas took a while to decide which guitar he should play that Sunday. Each instrument held its own secret. Besides, he was not sure whether he should play music, write or draw on his notebooks. All he wanted to do was to sit on a bench by the fountain. Let his face be caressed by the sun rays. Watch his musical creatures bathe in the sparkling waters. Enjoy being alive, enjoy being himself.

Yet, he looked out of the window and saw the cab parking outside. He glanced at the hall and realized he had left his Spanish guitar leaning against the wall. That's it. It would be his companion for the day. Thomas picked up his large black suitcase, then placed his guitar on his back and got into the taxi.

Lunch time. Thomas loved watching people sitting down for family meals, chatting, taking a break from work, and sharing the daily news. How should it feel to have a normal, predictable life? Thomas was sure he would never be able to find it out. In a way, he longed to be like anyone else, living just 24 hours a day. At the same time, his curiosity for new places and lands always kept him on the road. He knew he loved to walk the path of travelling musicians. Every time he crossed borders he felt as if he wanted to enter into a timeless land. A peaceful place with no borders, no beginnings, nor endings. Life as it really is.
<< see books